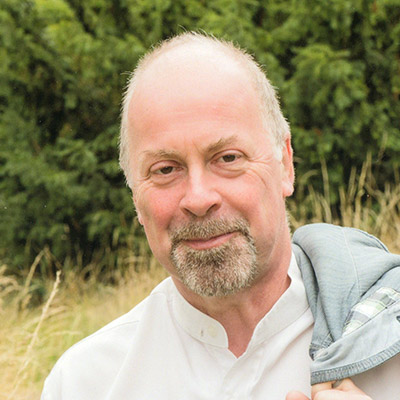 Rob is a director, writer, actor, teacher and dramaturg. He originally set up Damn Cheek alongside Darren in 2013, and has worked to support and develop the company ever since.

He worked as Artistic Director of the Shakespeare Festival in Stafford for three years, and has been a freelance director since 1980. He has directed new writing, classic drama, major community and site-specific productions, West End, off-West End, Rep theatres, No 1 tours and community touring projects across the British Isles.

Rob’s writing career began at the Oxford Playhouse in 1972, and recent work includes a verse drama Light and Dark, and a savage satire of the education system, Faction.

As an actor, Rob has worked in Rep, No 1 and small-scale touring, West End, as well as for the National Theatre and the Almeida Theatre. Much of the work has been classical – including Angelo in Measure for Measure, Buckingham in Richard III, and del Bosco in Marlowe’s Jew of Malta.

As a teacher and facilitator, Rob has worked freelance in the education sector, as well as training and directing actors at a variety of accredited drama schools for over 35 years.

As of October 2021, Rob hands over his mantle to Karen Spicer and is delighted to be taking his place on the Damn Cheek Advisory Board.