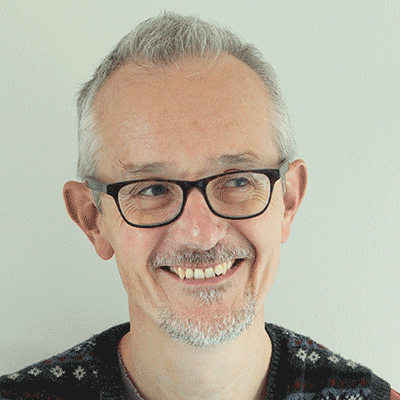 Stephen’s childhood was punctuated with regular visits to Harrogate Theatre. His parents also encouraged his interest in theatre through visits to London, where he saw many plays – after each of which, the whole family would patiently wait at various stage doors.

After gaining a degree in Drama at UCW Aberystwyth, Stephen worked backstage in several major London theatres before becoming Box Office Manager at what is now the BFI Southbank. While working there, he also began writing film reviews and interviews for magazines and for a major film website.

Following this, he managed an independent bookshop, retrained as a primary school teacher, taught in schools in disadvantaged areas of London and worked with creative lighting design company Light Follows Behaviour which works inclusively within varied communities, enabling them to improve their environments with light.

When working on the National Theatre’s production of David Eldridge’s Beginning, Stephen was inspired to start writing plays. He was encouraged and supported in this by Darren Cheek, and has since contributed scripts for Damn Cheek’s recent Zoom-based productions.

At present Stephen is developing a stage adaptation of Sally Bayley’s Girl With Dove, and has just had his first short story published. Alongside working backstage in the West End, he currently presents 2 podcasts: Mr Bert Pods and Nothing To See Here with Darren and Stephen.

Stephen is proud to be a part of the Damn Cheek community, which embodies the power of theatre working with communities to educate, enable and positively create change in our society.