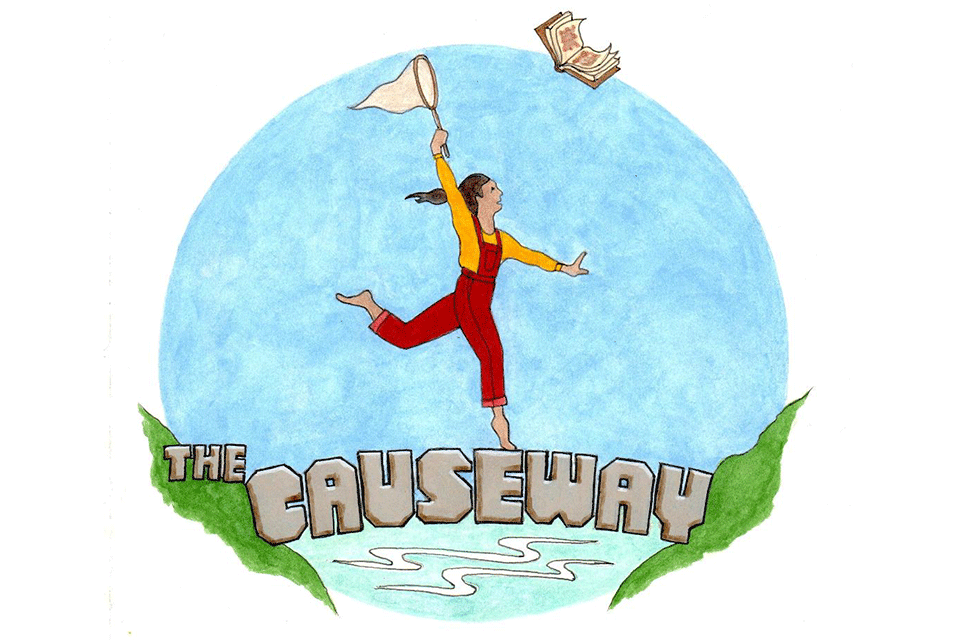 What can the 8th century Lindisfarne Gospels – the inspiration for Damn Cheek’s summer 2022 community project, The Causeway – tell us about the world in 2022? Quite a lot, explains writer and Executive Director, Tony Earnshaw.

When our partners in Gateshead asked us back after our last year’s Passion for the Planet performance, we were delighted. Building community is also about building relationships, and the prospect of working with this group of friends again was a good one.

When they stipulated building the project around the Lindisfarne Gospels, we were unsure how this would work. What did an 8th century religious manuscript have to say about today’s world? Quite a lot, as it turned out.

The Lindisfarne Gospels are the work of a single monk, Eadfrith, who spent 2 years scribing and illustrating, the result being a beautiful work of art as well as a religious document which played a key role in the history of the church in the UK.

The story of the community of monks which created this work is one of faith, flight and persecution. A story of being forced to flee by an invading army, of resistance to the Vikings, of travels by land and sea. And of finally returning to the North East and creating the city of Durham, which was to become an important base for defence, for the church, and for learning. Plenty of modern parallels there.

In creating a show for this summer, we have opted to follow the model we developed last year for Passion for the Planet, consisting of creative input from the community, work in schools, a steering group of community members, all culminating in a promenade piece of theatre involving song, dance, poetry, drama, clowning and more.

The idea of legacy, inspired by the legacy left by Eadfrith, forms one of the themes of the piece. (What is our legacy? A viable planet?) The release of creativity is another theme, the impact that an individual can have yet another, all inspired by Eadfrith. As we chart the journey of a community fleeing war and carrying their precious objects with them, we also look at the importance of texts and teachings to people from a wide range of faiths and none, and look at what we can learn from each other.

The project is called The Causeway after the causeway which connects the island of Lindisfarne to the mainland, a dangerous and not always available connection with the outside world. More resonances with today’s reality.

If this all sounds very serious, well it is and it isn’t. The workshops and community ‘making days’ will be full of fun, the show itself will have plenty of movement, participation, songs, silliness and laughter – and, as last year, we expect to leave the local community wanting more.

The Causeway has been months in preparation, gets underway in the summer term with schools work, and finishes in August with 2 weeks of performances. I’m currently working on the next draft of the script, building in reflections and inputs from some of our community team members before, once again, letting the director and designer loose on it.

It’s a joy to work on and I’m looking forward to seeing the joy on the faces of the audience when we finally get to showtime.