From page to stage and from stage to screen… 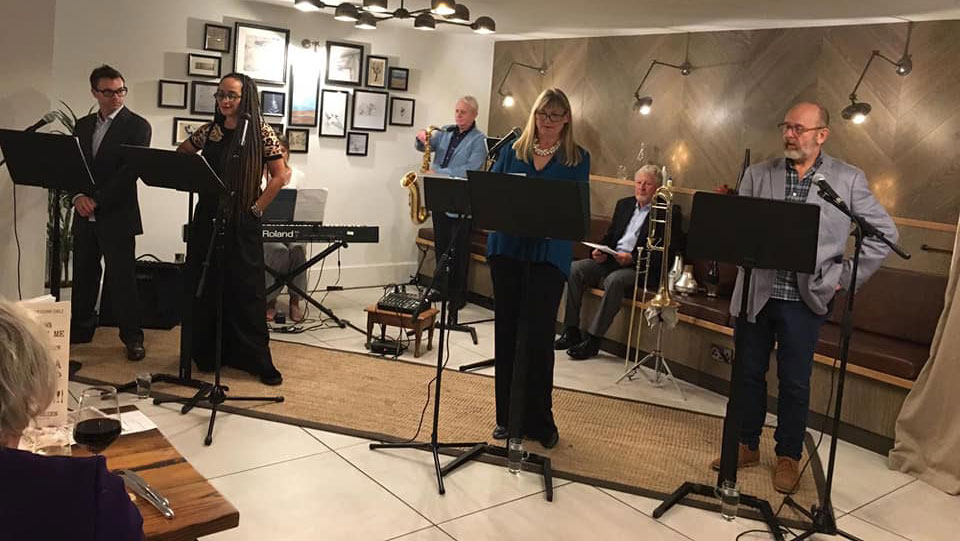 The image shows what it used to be like. What it will look like again. A stage show. Dinner theatre. Damn Cheek’s finest. The Greensand band. And, just on the edge of the image, an audience member with tell-tale cutlery and glass of wine.

For now, though, everything is online, and dinner theatre is no exception, so last night we presented Blessed Assurance as bring-your-own-dinner theatre. Dinner theatre in the comfort of your home. Our second foray into Zoom theatre, with an audience of about 60, so similar numbers to our first outing.

This was a different evening to the first one. On a Wicklow Hill was a two-hander, a straight play. Blessed Assurance was a dramatic reading with live music and four actors, all in different places. And we had to adapt to no band – the time lag on Zoom makes playing or singing together a non-starter. So we adapted – a cappella singing, solo sax, songs to backing tracks, handovers of phrases from one actor to another. All good fun, and pretty effective in the end. Never ones to shrink from a challenge, the Damn Cheek team came through.

Reactions have been positive, demand for further shows seems high and we’re working on that with plans to stage a master class of play development with my latest script, Preparing for Power, a staging of a revival of Collywobblers by Brendan Murray – a work from the 90s with resonance for today – and an exploration of psychosis in Diary of a Madman by Kelvin Segger. So, work to do.

In the meantime, there are poems to write, the next novel, and more ideas arising from the discussions at last night’s virtual after-show party. A quiet life in lockdown?

Finally, lockdown reading – the novel which inspired the dinner theatre can be purchased on Amazon.