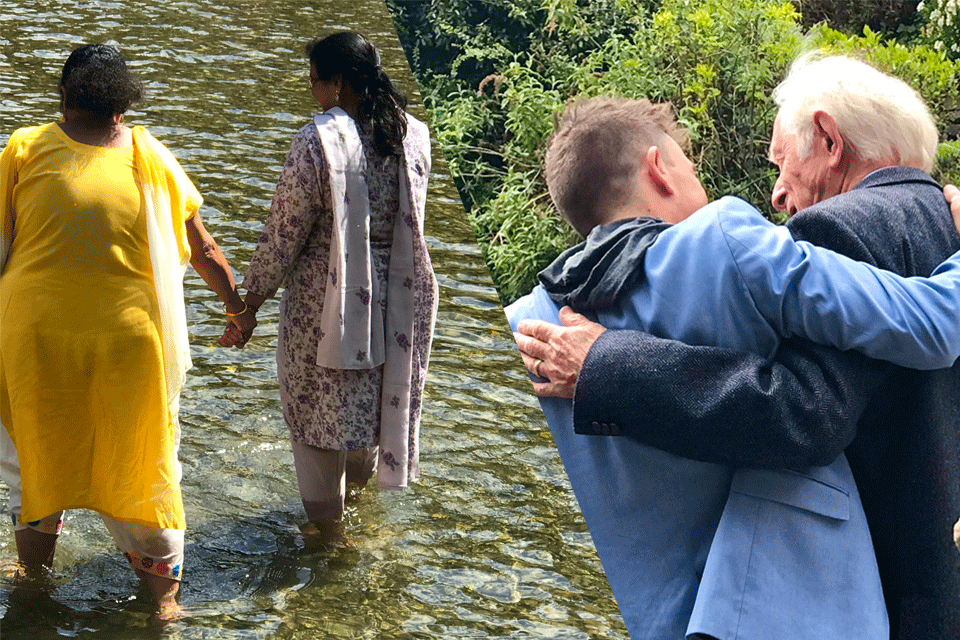 Damn Cheek’s founder–director Darren Cheek on the company’s reason to be.

Here’s what I want to say. Three words. Pay It Forward.

Some of these definitions cite fiction – such as Catherine Hyde’s book of the same name which weaves a tale of a 12-year-old who changes the whole world through asking everyone he helps to help someone else. Some definitions cite fact, or at least anecdotal fact – like the story about the woman in Florida buying a cup of coffee for the person behind her in the queue and starting a domino fall of 378 other customers who did the same that very same day.

I want to add a personal story.

I know what Pay It Forward means because I’ve been on the receiving end. And if I hadn’t been on that receiving end, I probably wouldn’t be an actor and director, and Damn Cheek wouldn’t exist.

Thing is, when I was at school, I wasn’t the most resourced of kids – things hadn’t always gone well at home and to be honest I was a bit of a pain. But time after time, a teacher – the same teacher – stepped up to support me. Not because I was able to give back to them, but because they’d been helped earlier in life and they wanted to help me.

I’d always known I wanted to be an actor – even though there was no way my family could afford for me to attend auditions or drama school. But again, time after time, the school (at the encouragement of the same teacher) stepped up to fund me. Not in hopes that I would reimburse them when I’d made my millions, but because they’d been given opportunities in life and wanted to pass those on.

As I got older I experienced countless examples of when someone – a mentor, an employer, a friend, a partner, even a stranger – made the effort for me even though I wasn’t at the time able to return the favour. They chose to Pay It Forward. I reaped the rewards.

What I learned from all this is how much I believe we have the responsibility to pass on what we have, what we’ve been given. I believe that if we have skills we should use those skills to up-skill others. If we have knowledge that will help others, why would we not share that knowledge, why would we not teach? If we’ve been treated with kindness – and even if we haven’t at times – we need to be kind down the line. We need to leave a legacy wherever we can.

And with legacy comes ripple. I’ve seen over the years that when we pay forward, we don’t just reach the person we’re paying to, but all the people they pay to – and on and on. Rippling out for ever.

So I try to do it. As an actor giving to audiences. As a director supporting and guiding artists. As a founder–director of Damn Cheek, a company which works with communities – often disadvantaged and disenfranchised communities – not only to entertain them, but to help them develop.

Currently we are helping early years children start school with the right skills (Passion for the Planet). We are championing college students entering the world of work (The Causeway). We are supporting older people to navigate later life (Monday’s Child). And alongside our great friends at Extraordinary Bodies Young Artists, we are mentoring disabled and non-disabled performers into the professional arts world. Our focus on mental health and wellbeing continues with ongoing psychotherapeutic work; with our series of workshops and talks for children, young people and their families; with a new production in the pipeline about Disordered Eating.

The ripples continue. This summer, we’re putting heart and soul into Damn Cheek’s latest community-centred project, The Causeway – a silly, funny, Lindisfarne-inspired show, with song, dance, music, puppets and food. A show whose key theme, not coincidentally, is legacy. And whose location, not coincidentally, is an under-resourced area of the UK.

Let me be really clear. It’d be great if Damn Cheek made millions. And we wouldn’t say no to a coveted award or two along the way. But we’re doing all this not because there’s payback in the conventional sense of the word. Though of course there is huge payback when – as so often happens – our audiences tell us how much our work changed their lives.

We at Damn Cheek are doing what we do – and will continue to do it with 100% commitment and love – for one core reason.

Because Paying It Forward is quite simply an awesome thing to do.