When the leaves were green: reflections on Monday’s Child 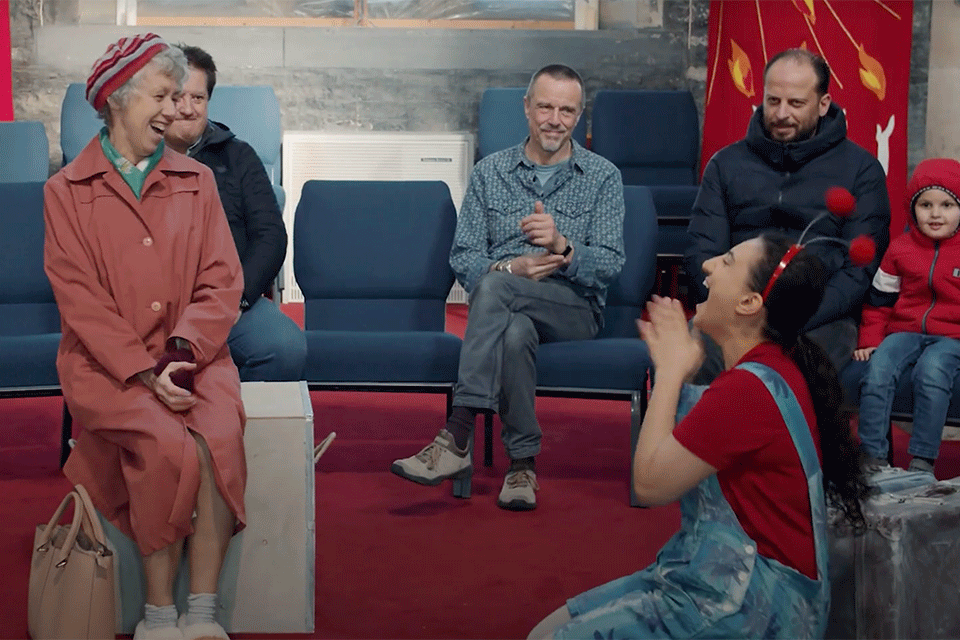 Monday’s Child writer Brendan Murray reflects on the origins of his moving, poetic and magical play about memory, and audiences give their feedback on the recent Damn Cheek production in Gateshead.

So how did it start? And where? And when? With an email from Wendy Harris back in 2014. I’d worked with Wendy before. Two years previously, we’d done Hare and Tortoise but now Wendy was talking about something less fanciful, more grounded in reality, and inspired to some extent by the relationship between her children and her mother-in-law who was in the early stages of dementia.

So we meet and we talk. About youth and age; memory and forgetfulness. About discovering the world and losing grip of it. About time and reality and a sense of self. I go away to think, to read, to talk to people: neurologists, psychologists, old people, young people, people working in the field of dementia – looking for a place to start.

Luckily, Wendy has set some boundaries – about the play’s length, the number of characters and even that the characters should be a young girl and an old woman. The rest is up to me. I sit. I walk about. I lie on the bed and cry. I try to think of what I can steal (and disguise) from other plays, other playwrights. Anyone. Anything.

Then I remember some lines from Blake’s Auguries of Innocence, re-ordered by JB Priestley in Time and the Conways:

More sitting, walking and crying. I think about the young girl and the old woman. About who they are. Where they meet. What they might do. Then, two things happen. Followed by a third. And maybe a fourth.

I’m on a railway platform. Clapham Junction. An elderly couple: a man and a woman. Siblings? Spouses? There’s nothing remarkable about him. But she… although perfectly conventionally dressed in skirt and coat, she wears on her head a pair of gaily bouncing deely boppers. I think for a moment there’s some tomfoolery going on.

But watching the couple for a time, I come to think not. I come to think that today, before they left the house and set out on their journey, he helped her on with her coat and asked if she were ready, and she said Not yet; that she wanted to wear her bouncers. And that his heart fell a little at the thought that people might stare at her, an old woman wearing a child’s novelty headband. But then seeing her eyes – and everything held in her eyes – he said Well, best put them on then, and now here they were at Clapham Junction waiting for a train.

And I take her home with me – in my head – this old woman. And I start to sketch a story – or enough of a story – to take to York, where Wendy is waiting with the actors and the other creatives to see what I’ve come up with. It’s not much to be honest: a young girl meets an old woman and they play; maybe find things? Deely boppers figure somehow. As plots go, it’s on the thin side.

I get to my hotel in York and put the TV on. I start to unpack. But then I stop. I sit on the bed. And I watch.

I’m watching the last few minutes of a programme about the French dancer, Sylvie Guillem. She’s dancing a piece – her farewell solo after her stellar career – by Mats Ek. The piece is called Bye. And Guillem is dressed as… what? An old woman? A little girl? The piece seems to be about playfulness and disappearing – but not necessarily in a bad way.

And I say to myself, this is it. This is the play. Somehow. That the old woman and the young girl are perhaps not two characters at all but the same character at two times in their life: the time of discovery and the time of things slipping away.

The next morning, I go into the rehearsal room at York Theatre Royal and there in the middle of the room – nothing to do with anything – is an old, white garden bench. And I suddenly know where the characters meet and the play happens. It’s in a garden.

Over the next two days we share: the research; our thoughts and feelings about being young, getting old, remembering and forgetting. And we play. With the fragments of the story; with design ideas, and musical ideas, and I go home full of confidence and excitement and immediately grind to a shuddering halt.

One final round of lying on the bed weeping, and then I hear the old woman say a line. It’s a line I’ve been waiting for, reaching for: the key that will finally unlock the story of the play. And this is what she says: I have been here before. I remember this place when the days were long and the leaves on the trees were green. And I know who she is; why she’s come to the garden. And I sit down to write the play.

Wendy and the creative team make the play work beautifully – and the same is true of a second production in Ireland a year or so later. And now here we are in 2022, with a new creative team, led by Darren, breathing life into what, after all, are just marks on paper.

And again it’s beautiful – the music, design, the acting, all meeting with the audience to make them smile and touch their hearts. And isn’t that the work of art?

We at Damn Cheek toured Brendan Murray’s Monday’s Child in Felling, Gateshead during the early spring of 2022. We thought it was a remarkable piece of writing, and everyone involved with it felt honoured to be working with the script. When we got feedback from the audiences, we knew we’d been right in our thoughts and feelings.

But don’t take our word for it. Instead, read these comments about Monday’s Child made by the children, teachers and Age UK service users of Felling, Gateshead.

Wow! What a wonderful play…

Life is pretty tough for the majority of children at this school, so having the quality of something like Monday’s Child was particularly important and special for them.

In all my years as a teacher I have never seen a group of children so mesmerised and engaged.

My class all said they would give the play 5 stars and could easily tell me the parts they enjoyed.

I am so glad you gave our children the opportunity to be part of this wonderful event.

It was really good … I just didn’t expect any of this.

The play was very personal for me, beautiful.

It was so poignant – I cried pretty much all the way through it.

Thank you so much for the opportunity to see this amazing play – it should be shown nationwide.

Monday’s Child has given me a reason to get up in the mornings again!